In the third of a series of interviews with emerging female live performance designers APDG member Antoinette Barbouttis interviews Isabella Andronos – about designing theatre on a shoe-string, Greek heritage and more. Isabella works across theatre, opera, film, VR and TV. A graduate of NIDA and the Sydney College of the Arts, her recent set and costume design work for the stage includes Billionaire Boy (currently touring), The Screwtape Letters, La Calisto (Sydney Conservatorium of Music) and the Beside Ourselves Collective’s Great Island.

This series of interviews have been republished here with the kind permission of Audrey online journal.

“I ENJOY DESIGNING SPACES THAT ARE TRANSFORMATIVE, INTERACTIVE AND FULL OF SURPRISES”

AB: How has your emerging career evolved since graduating from the Design Course at NIDA?

IA: It’s been interesting to track my designs from when I first started. Initially there were very limited resources and miniscule budgets in the projects I was offered. It was very difficult work to carry out, as I was creating the complete realisation of the designs, including the building of sets. I think this is a common experience for many emerging designers in Sydney. In a professional setting this would normally be carried out by a range of departments. 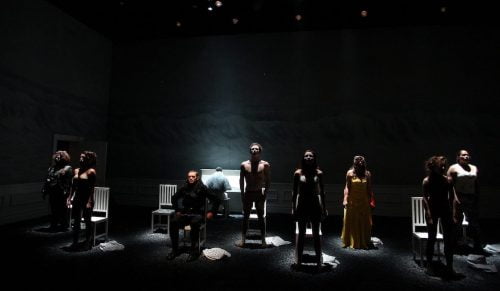 AB: Speaking as a NIDA graduate also, while we had guidance, we weren’t taught to sew or build. Do you feel that making the set as well as designing it is an unrealistic expectation? Or is it useful?

IA: While we did get some experience with the workshop in our training at NIDA, coming out into the “real world” into low budget shows, there was much more of an expectation for the designer to also be a set builder and fill other roles to get the shows over the line. It’s a bizarre process.

While it’s important to understand how things work and fit together, I’m not a qualified builder. From a safety perspective, I’m pleased to now be collaborating with set construction professionals.

For example, I was excited to work with Thomas Creative in Wollongong for CDP’s Billionaire Boy which I did the set and costume design for. In a very fiddly set, they had some excellent ideas about magnets, pin hinges, scenic painting, printing and gold finishing. It might sound banal, but it was great to hear ideas from a professional point of view. 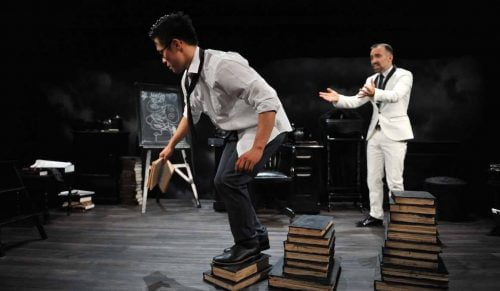 AB: Another thing we share in common is that we hail from the same tiny Greek island. We are guaranteed to be related. How does it feel moving through the industry with a 4th cousin twice removed?

IA: It’s great! I love that we’re both from the same place and have two families to share: NIDA and the Greeks. My Yiayia is from Castellorizo and when I mentioned your last name, her eyes lit up, because she knew your Uncle George from the Greek Orthodox Church community. I haven’t been to the island, but we should go together.

AB: Yes! Next summer we can squat in the family rubble. Do you have any connections to the Greek community in the Sydney theatre scene?

IA: The first show I ever did was at the Greek Theatre in Marrickville, which my grandparents were very pleased to come to because it was a “Greek Theatre”. I’ll also mention that one of the first big shows I did the set design for was The Greeks: Hecuba, Agamemnon and Electra, directed by John Sheedy. A little Greek shout out to Con Costi and family, who I’ve enjoyed collaborating with over the years. 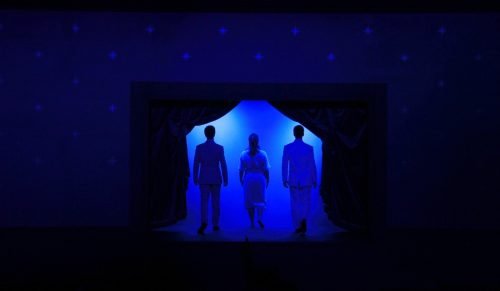 AB: Congratulations on being a finalist in the Dutch National Touring Opera Concept Challenge for your design of Jevgeni Onegin. You are an accomplished illustrator. Did your skills and talent help cement your finalist position?

IA: Illustration is a huge component in the competition. Director Elsie Edgerton-Till and I compiled a document that we submitted to the Nederlandse Reisopera. It included concept art of the set design, technical drawings, costume illustrations, costume breakdowns, props images, mood boards, reference pictures, conceptual statements and tables of the proposed cuts to the score.

Illustration formed a very important part of the communication process as we were submitting our work digitally. I find illustration in general to be very useful in the set design process, from early sketches, to concept art and beyond. 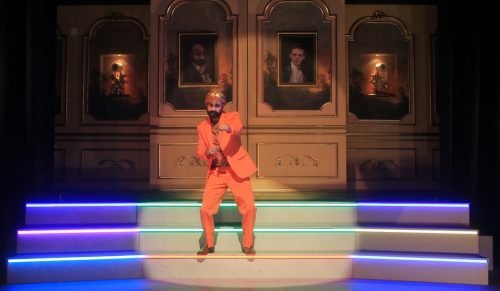 AB: How do you see yourself progressing as a designer into your early career?

I designed Tel Benjamin’s virtual reality pilot/POC for the miniseries The Obscure. It was a new experience of set design for me. The OZO camera sees 360 degrees: it sees the walls, the floor and the ceiling of the spaces. It was very different to my experience of design for the theatre, where the audience is in a fixed position and you can anticipate the sightlines of a set. You can create “offstage” spaces, whereas with VR there is a lot more “seen” at any given time.