Internationally renown lighting designer and APDG member Nick Schlieper was recently at work on a new production of Médée for Saltzburger Festspiele in Germany, working with director Simon Stone (set designer Bob Cousins, costume designer Mel Page) when he put aside some time to answers questions from some Australian designers.

What qualities do you look for in a director?

The quality I probably most look for is intelligence! The kind that allows for a complete understanding of a piece, whilst having the mental agility to re-imagine it, rather than to simply “put it on”. Obviously, working with a director with a lot of technique and a deep understanding of how it all works, allows for a much more streamlined process, but I believe the former is far more important. If a director is smart enough, they’ll learn the various techniques quite quickly, but ultimately I’m more interested in working with someone who has something to say. Someone who has a burning desire to see “that” piece of text or music on a stage and a damn good reason why they want to do so.

I do also need that person to be someone I feel a sympathy or a synergy with. I stopped working with directors I don’t like a long time ago!

I’d also add that being a director is a really hard job and therefore being a good director is that much harder again. I think there’s sometimes a tendency for people to forget that. It can be a really tough gig and all the more so if you don’t always take the easiest or shortest route to solving and realising a piece of theatre.

OK, so now it’s soapbox time! Theatre and film are the only artworks that are regularly produced by a collective of people – that are literally born of more than one brain. In theory, this should be a recipe for disaster. The risks of this process are only worth undergoing if the end result is to produce something that is greater than the sum of all of these parts. In other words, it only works when the fruits of 3 or 4 or 5 creative minds all genuinely contribute to a piece of work. Otherwise, it’d be much better for it to have been born of one super smart brain and then be nursed into realisation by people who have the various specific technical design skills required. There are (a few) directors, who I believe are at their best when working in the solo, auteur vein. While for obvious reasons, that makes them uninteresting to me as collaborators, it by no means diminishes the power or “success” of their works; works for which I might well end up having great admiration. But these directors are very few and far between.

For what I think of as the “messy democracy” model to work, it needs to be both a genuine democracy and simultaneously one in which all the participants are acutely aware of their boundaries. Every member of it needs to be able to argue their case honestly and forthrightly, yet know when to pull their head in! Most importantly of all – the ONLY valid criterion must always remain the greater good of the production. Every single decision should always and only be weighed against what will ultimately communicate most clearly to your audience, whatever it is you’re trying to say.

Therefore, every member of that team needs to know what that is and know it from the outset. Right down to the basics of “why are we doing the millionth production of Hamlet, in this city, in this company, at this time.” If that sort of question is posed (and at least vaguely answered) right at the outset, then as the work progresses, everyone involved has a set of yardsticks to measure their decisions by. Then decisions can genuinely be measured against the criterion of “the greater good”. Personally, I simply won’t work on a show unless I’m involved in it from the very beginning. Hopefully this rant clearly explains my position!

How has the lighting designer’s role changed since you began designing shows?

The collaborative process I have just described simply didn’t exist when I started out. In fact, the term lighting designer was a pretty damn sketchy one, and was often applied to the Head Electrician of the company who would light shows under the close direction of the director. The idea that lighting design was as much of an artform as other design disciplines, let alone the notion of horses for courses – that lighting designers should be chosen (by the director!) because the nature of a show was better suited to one individual rather than another – took a long time indeed to become the norm. I’m writing this from Salzburg which, like all of the German speaking world, persists in a culture of directors lighting shows via the proxy of an electrician. Whenever I work here, it usually takes the company and the crew quite a while to figure out how “our” system works. Effectively, who I am. And yet also as I write this, I’m keenly aware of the fact that only one single tertiary institution in Australia offers a course in lighting design – so maybe we haven’t advanced that far after all… 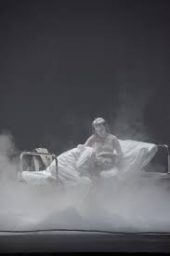 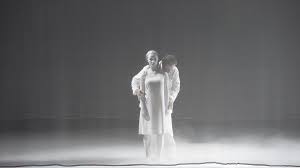 In Australia only academics use the descriptor scenographer;  most theatre designers still call themselves designers. How different is it in Germany – the ‘home of scenography’?

Firstly, I don’t think that  – in that respect – there’s very much difference at all in the German-speaking theatre world. As in Australia, the term Scenographer is really only used as an academic descriptor, most German designers simply call themselves Bühnenbildner – Set Designers. The only variation being the less common term “Ausstattung” which is pretty impossible to translate directly, but implies one of two extremes. (A) I did it all! or (B) I was merely the window dresser! In reality, it usually implies that that person did both set and costumes (and possibly lighting as well) but the term also has connotations of being a functionary who simply executed an idea, so it’s probably not helpful in terms of this conversation.

How have the changing technologies over the last 30 years effected your design process?

Actually, surprisingly little. I was eventually dragged (kicking and screaming!) into the world of CAD, which apart from causing me to demote my drawing board to the status of model table, hasn’t fundamentally changed my design process. Thanks to the fluke that saw me learning technical drawing at high school, I really still use the same process on a screen that I used to use when drafting by hand. It is however a hell of a lot easier to make a change!

So much for process. The elephant in the room here, is of course the inexorable rise of the LED. It’s unimaginable that this new one-stop-shop light source will ever replace the function of a halogen lamp, in that it will never be a full spectrum light source. Unfortunately, one bit of the spectrum that it’s missing is exactly the bit that skin tones respond to, hence the kind of lighting I both like and practice will essentially become impossible…

Do you think you have a distinct style?

I probably do and people tell me so, but I’d find it hard to describe myself.

You are a lighting designer who also designs the set for some of your productions. When you design both sets and lighting, how does your process change?

It doesn’t really. I still sort of see the whole thing at all stages of the process. Mind you, I once presented a set at Belvoir and [Belvoir then Artistic Director] Ralph Myers asked me afterwards how I was going to light it. Embarrassingly, I had to admit that I didn’t really know, although I knew how I wanted it to look!