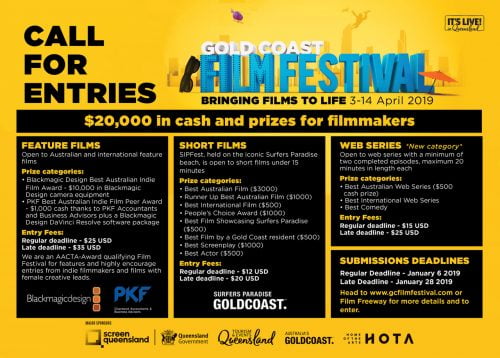 Have you put blood, sweat, tears and money into a feature film, short or web series? Submissions are now open for the 2019 Gold Coast Film Festival and SIPFest with $20,000 in cash and prizes up for grabs for filmmakers!

Short films will compete for the chance to screen at SIPFest on the iconic Surfers Paradise Beach and share in $8,000 in cash prizes while the Best Australian Web Series will be awarded $500.

Submissions are now open through Film Freeway. Head to www.gcfilmfestival.com for details and to enter. Good luck!