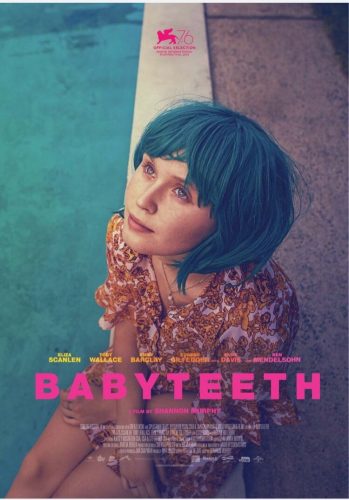 Sherree, what led you to working on Babyteeth?

I had worked previously with Alex White (Producer) Art Directing a Halloween commercial back in 2016 for MandM’s. Unsure how I got on that one – but we just hit it off like, we had been friends and collaborators for years.

Alex emailed me the Babyteeth script and asked me to come meet her and Shannon Murphy (Director) at a café in Surry Hills. The meeting was very relaxed – we mostly chatted about each character and their motivations before starting to discuss any design concepts, film/tv references, tone/mood, or possible locations.

I had prepared an initial look book of references in response to the script that guided the conversation and also sparked discussion with Shannon about how she visualised the characters, sets and the overall feeling that we wanted to leave with the audience. It was extremely refreshing that we didn’t get into what was feasible or achievable –  we spoke purely about the story, characters and design. It was a long and buzzing meeting, both creatively fulfilling and had me thinking “I hope I get this job!”

What was your design process on this film?

Initially, I read the script a few times and sat with it for a few days to process. The script is complex, heavy-hearted, funny, energetic, sometimes bizarre and unpredictable – I love this script by Rita Kalnejais! Then I dived into research excitedly. I prepared a small six-page look book for the interview – more dedicated to expressing tone, characters and a general look into the three bigger sets. Some of the conceptual ideas from the initial look book did make it to screen: in particular, the projections and large scale portraits as artwork in the warehouse party scene were formed in this initial response to the script. Later, through meetings with Shannon and HODs this look book (now called the Style Guide) was fleshed out to about forty pages. It was the result of true collaboration, containing a mixture of images from Shannon and myself along with Andy Commis (DOP), Amelia Gebler (Costume Designer), and Angela Conte (Make Up/Hair Designer). The book was printed and lined the walls of each department’s office.

Early in pre-production we had a meeting with the whole crew where I went through each page of the Style Guide. This helped make the production environment feel more inclusive – I found it was important to remind ourselves what we wanted to accomplish and of the story we are telling when those logistical and budget restraint headaches came around.

One of the most important attributes of the design process was going to be location choices. Working to a tight budget meant that finding the perfect locations would be essential in order for us to set the desired tone and to elevate production values. Early in pre-pre we spent some time discussing the locations – in particular, the Finlay House. We would spend about three weeks of the five-week shoot at this location. Adhering to the description laid out in the script would be extremely difficult as our four main characters often weaved in and out of the interior/exterior.

Meanwhile, one of the other locations (Toby’s house) needed to see directly into the Finlay House, so there was an extra element of complexity.

After setting ourselves up for a huge challenge in finding the main location, in the end we saw one and only one house. The team was sold by this rundown mid-century house centered around a large squared atrium. The house was lined with rooms that resembled theatre stages and had a weeping, horrifying tree in the front yard with an open-fenced pool in the backyard. In many ways the house felt as unusual and unpredictable as the characters who would reside there. This particular location inspired much of the realism and comedy for both Shannon and Rita (Screenwriter) when adapting the script to the location.

Securing the main location at the start of pre-production extended the time I could purely engulf myself into the design of each room. It afforded me time to reflect on possibilities without any pressure to make quick time-sensitive decisions. Additionally, it gave us the luxury of time and resources to concentrate on other locations in order to expand the world of Babyteeth and make it more dynamic and authentic.

There were two very interesting new design processes that I experienced on Babyteeth, both led by Shannon. Firstly, the weekend before pre-production started, the HODs went away   for a 3-day creative retreat where we read the script all together aloud, stopping and starting to discuss character motivations and references. In the evenings we watched films together, including Victoria (Germany, 2016) and Breaking the Waves (UK, 1999). It was a lot of fun   and undeniably one of the core reasons Babyteeth worked so well at a collaborative level. At the heart of the script were these four characters who were very complex and erratic.

Understanding them from Shannon’s perspective was at the forefront of any conceptual design. Secondly, Shannon had actors who were friends of hers stand in for the four main roles and had them play out each scene in the location of the main house. I was filming and I took notes. Seeing how each scene was blocked in the house was vital and extremely valuable in the design process.

One of the most important processes was bringing together a skilled and passionate art department crew. We were small but we were mighty. Bill Goodes (Art Director) brought with him a full bag of skills in construction, logistics, and over a decade of experience in the art department. Ishtar Cavagnino (Set Decorator) and Jamie Cranney (Buyer/Dresser) brought a very personalised and distinctive layer of dressings to all the sets. Along with Jacob Weir (Prop Master), Dan Alleck (Art Department Assistant) and Laura Anna Lucas (Create NSW Attachment) contributed significantly and truly elevated what ended up on the screen.

How was your collaboration with the director?

Shannon is extremely passionate, direct and holistic in her approach along with being super open to new ideas. Weird and offbeat approaches were very much encouraged.

There was a free flow of information coming from Shannon. No details were left out, including the music that would be used for each scene or the blocking of the actors. Being privy to this extra information enabled me to make more informed choices as the designer. We also shared an attention for small details; our discussions about anything from hero props and curtains, to every piece of artwork on the walls meant the design was always carefully considered and appreciated.

Shannon is also empowered with a courage that she instils in all her collaborators. There was no atmosphere of shame around the notion of sharing ideas that may not necessarily make it in to the final product. She encouraged a flexibility that I hadn’t seen before, and she wasn’t afraid to change direction if something wasn’t working. She continues to inspire me with her unique outlook and all that she is achieving at the moment – going on to direct the third season of Killing Eve.

As the production designer how was your collaboration with the costume designer?

Amelia and I were already familiar with each other having previously worked and lived together in Perth making a Netflix film called Otherlife back in 2016. Our dynamic on Babyteeth was extremely collaborative. I saw most of the costume options for each character throughout pre and production and our design concepts were very closely aligned. Amelia was hugely pivotal in creating the look of the film and it was great to have a costume designer that was so receptive to my ideas.

Together we worked hard to make the colour in Amelia’s costumes and characters pop against the neutral backgrounds in the main set. In other scenes, we contrasted or bled all our colours in the same way for different effects. Amelia is extremely skilled at making actors feel comfortable. She also deserves a lot of praise for bringing together the looks of the younger cast. It is quite tricky to tap into their generation with an authentic pop-cult attitude.

Additionally, Angela Conte (Head Make Up and Hair) was an instrumental part of the design process. Building the colour palette was made so much easier with her incredible, bold and epic work in mind. In particular, Milla the main the character undergoes many transformations throughout the film with her hair including 3 wigs.

What was your experience working on a female led production?

It was great to have a strong female presence leading the production. Jan Chapman (executive producer) and Alex are fantastic at running a production that is inclusive and respectful. Alex and Shannon also did a great job in bringing together a truly wonderful group of people in the crew. There was a very positive energy among all the heads of department.

With initiatives such as Screen Australia’s Gender Matters there has been a noticeable push towards giving females the opportunities and experience they deserve. My hope is that with all the progress and hard work in the industry this will become the norm and there will be more of a balance without having it be such a talking point.

What were the major challenges you had to face on the film?

The major challenge was to balance a low-budget with the pressure of an international and utterly tremendous cast. It needed to feel like it sat comfortably beside films with about four to five times the art department budget. This partially fuelled my design process – making a plan of what elements are the most important narratively, the screen time of sets/scenes and what will or won’t elevate the production value. All the while I really tried for this not to control or comprise any collective or personal design ideas.

There were also technical challenges. For example, it became clear after creative discussions that the main location (Finlay House) would be lit mostly by practical sources. This required a great deal of time and resources from the art department to create natural and authentic lighting. We worked hard to create the desired depth, shape and consistency within the set. Overcoming this challenge was very rewarding and enjoyable as it encouraged a strong collaboration with Andy Commis (DOP) and his team.

What does the experience of screening at Venice mean to you?

Seeing the film in Venice allowed me to be less self-aware and appreciate what the film meant to everyone else. Being able to support my colleagues in an environment like Venice was special and I was so proud of their achievements, knowing the constraints they faced in getting the film on to the world stage. It truly was validating to see the hard work of our team being celebrated.

What are you looking forward to achieving/ working on next?

I want to gradually continue to learn, gather experience and explore as a production designer on projects that are thought-provoking and a little offbeat.

I’m also steadily furthering my education with focusing on developing advanced skills in 3D visualisation and architectural drafting. Expanding my understanding of design from an academic perspective as well will hopefully power my longevity as a contributing innovative production designer.

I hope I can foster a fun and engaging work environment for the art department and strike a healthy work-life balance. Maintaining and forging genuine relationships with collaborators is exciting to me – there are so many people in the industry who I admire and would love to work with in the future.