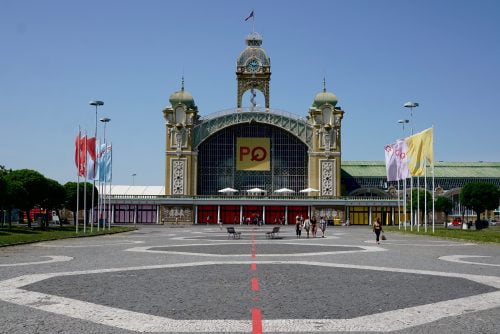 In June this year we were very proud to present four exceptional Australian artists as well as share in the work of many others at the Prague Quadrennial of Performance Space and Design (PQ).  If you don’t already know, PQ is the world’s preeminent festival of design for live performance (although it actually covers a vast range of events from performance art to urban actions to architecture). Every four years, it is the meeting place for artists and designers from over seventy-five countries. This year’s festival brought over 7,000 visitors a day to the Exhibition Grounds along with an even greater on-line following.  It is a place of cross generational and cross cultural exchange and professional and creative development.

Design is broad church.  And that is something that PQ and the countries that participate recognise and celebrate in works ranging from site specific explorations to explorations of materiality, virtual reality to the reality of flesh.  The PQ main site (this year it was held at the Prague Industrial Palace) is transformed into a sprawling and frequently chaotic mass of ideas, moments and interactions.  It has the unique talent of celebrating design as artifice while excavating scenography for social change. A place where politics intermingles with craft and scenography is a tool of progress.

In this rich and dense landscape we were thrilled that so many Australian artists were able to connect, discuss and evolve.  For the Exhibitions of Countries and Regions we presented 36 performances over 11 days to full houses (i.e. there were never enough wireless headphones to go around!) along with integrating videos and artefacts from our four key works:-  Moira Finucane (The Rapture) and Justin Shoulder (Carrion), who both performed exerts from their productions in our ‘wunderkramer’, built an emphatic fan base with lines forming well in advance of each show.  ‘The Second Woman’ by Nat Randal and Anna Breckon had many determined to see it for its European seasons and ‘Repatriate” by Latai Taumoepeau not only won over many fans but the presentation also won a coveted “Award for Excellence in Performance Design”.

The exhibition focused on the performances of solo artists but with purposeful recognition of the village of artisans that surround and make such works possible.  Alongside these four works we also featured many others through our website and book “The Impossible Project”.  An ongoing work the “Impossible Project” collects together and shines new light on creative projects that were begun but abandoned.  Projects that, despite all the will in the world, proved to be too unfathomable, too ambitious, ill timed. Impossible. (visit theimpossibleproject.com.au or insta for more).

In the student pavilion students from NIDA, VCA and WAAPA came together on a collaborative project which, despite some set backs proved to be endearing and engaging.  Beyond that the students also proved themselves to be flexible and resourceful, stepping up when things maybe looked a bit bleak, and gaining the respect of many around PQ.

Meanwhile Australian composer and sound designer Roger Alsop was curating Sound Kitchen combining short presentations with discussions all about the audible.  And over at PQ Talks Tanya Beer, M’ck McKeague,Tessa Rixon and other Australians presented papers disseminating their approaches and ideas.  Several Australian artists were also pleased to take part in the UK’s Round table discussions as well as a round table comprised solely of designers from across Australia focused on the peculiarities of Australian scenography.

While we had less participation in the adjunct programs than in 2015 iteration, we were thrilled that the work of Punctum (Public Cooling House) and Stukel Stone (Flow State) were showcased in the Theatre Architecture program and the Australians featured in the Site Specific Festival, THE HOLE COLLECTIVE touched many with their generous and enigmatic work.  Over five days, as the name suggests, they dug a hole. It was precisely two meters diameter and 152cm deep.  Helped by visitors from all over the globe THE HOLE became something of a touch stone as people returned again and again to witness the progress. On the penultimate day of PQ a crowd gathered around this anti-monument and collectively we filled it back in, literally stomping the dirt back into place until everything was as it was before and all that remained were new friendships and a sense of achievement.

The Hole, by The Hole Collective – Photo by Anna Tregloan

Alongside the honour of presenting Australian artists, Erin Milne (from Bureau of Works who produced PQAU with me) and I hoped to build a sense of community amongst the Australians attending and it was an honour to have so many attend our little evening of frivolity as well make the PQAU exhibition something of a hub.  PQAU is funded on a project basis and we are very grateful to Australia Council for the Arts and Creative Victoria for their investment in the project along with Creative NSW who stepped up with my airfares and accomodation.  It would not have been possible without the generous giving of time, energy and nous by the amazing Australia team.  It was not just a tremendous ten days of inspiration (the beauty of the French pavilion’s slowly growling fur bodies or the calm beauty of Lativia’s immersive music box were among my favourites) but an opportunity to build knowledge, connections and to deepen our understanding of the world and the place of scenography within it.

L-R Inside the Student Exhibition, Moira Finucane, performing THE RAPTURE at PQAU19, Audience at PQAU19, Justin Shoulder performing CARRION at PQAU19 – Photos by Kate Bliss & The Hole, by The Hole Collective – Photo by Anna Tregloan