Throughout history, artists and designers have used clothing, props and ornament to shape representations of women. In this two-part event, award-winning set and costume designer Anna Cordingley talked to Geraldine Kirrihi Barlow, Curatorial Manager, International Art, QAGOMA, about the use of theatrical dress in the ‘Of Women’ display at the Queensland Art Gallery, followed by a behind-the-scenes presentation of Cordingley’s approach to designing for Opera Queensland’s 2018 production of Don Giovanni, directed by Lindy Hume.

Cymbals clashed by Edward Burne-Jones’ Aurora, 1896 (fig. 1) and the dagger and robe of Mrs Yates in George Romney’s Mrs Yates as the Tragic Muse, Melpomene, 1771 (fig. 2) – what do personal props tell us about these women and how are personal props used in Don Giovanni?

The contents of our handbags, or of the glove-boxes in our car or of our kitchen bench, say so very much about us.  Like it or not.  And props and peripheral decoration peppered throughout art history elude to characteristics and traits of the subjects represented in a similar manner.  George Romney’s portrait of Mrs Yates as the Tragic Muse, Melpomene offers us an ivy or cypress wreath and a dagger.  We could take the cypress wreath to be a harbinger of death or of mourning, so goes the symbolism of the cypress in a both a European and a Middle-Eastern sense.  And the dagger would corroborate that.  Edward Burne-Jones’ Aurora is figured clashing cymbals.  She is waking the town, as Aurora is the Roman goddess of dawn, and you see the mysterious half-light of morning in the skies behind her.

Donna Elvira (fig. 3, 5), the incredible tour de force that is hunting down Don Giovanni for reasons very different to Donna Anna, is on a literal journey.  She and her maid are chasing him across the countryside, and so she has accoutrements.  In our production, hers are of a busy modern woman – in her handbag are pens, tissues, a Snickers, cigarettes and a lighter, pills for migraines, a tipple of gin.  When she is searching for the lighter, fed up, she spills the contents on the table before her.  Such is a woman in a flap, and in this moment, she is ferocious. 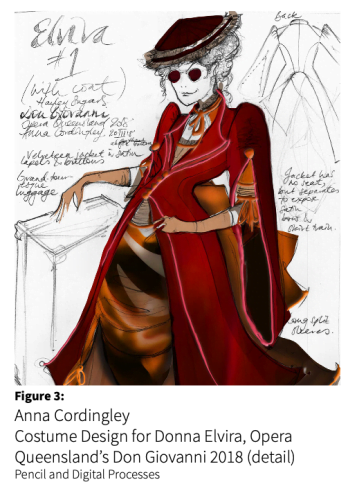 Leporello, in the same scene, is showing Elvira the little black book he carries around which lists the conquests of Don Giovanni (fig. 4).  Leporello is charged with carrying it because he is servant to an incredibly arrogant man who would never carry anything himself, but the book itself reveals to us the cruelly meticulous cataloguing of Don Giovanni; it speaks to the clinical nature of his obsession.  The recording of his women evokes the pathology of a serial killer.

This is damning evidence; Leporello wouldn’t show this book to just anybody, but he will show Donna Elvira because he recognises her misguided fixation and feels for her.  Inside that tome are thousands and thousands of names.  Only when she sees her own does she feel sick to the stomach and believe his tales of Don Giovanni’s callousness, whereby her love turns acidic.

The artifice of costuming as explored by Michael Cook in Broken Dreams Series, 2010 and the parallel use of anachronism as an artistic device across the Don Giovanni design;

Cook’s work plays with, subverts and parodies roles and archetypes belonging to Australia’s colonial history and our indigenous one.  Costuming is a tool in his artwork which shifts our perception, expectation and, in a sense, reframes the subjects both to both empower and to ironically undermine.  Our Don Giovanni, as you’ll see when we wander through the design process, is anchored in Victorian London, and yet there are equally anachronisms in the palette to both empower and deliberately undermine the situations unfolding, and to divert audience expectation and enable surprise.  Costuming is definitively artificial, and when it is at its most playful, most liberal, most pointed and dramatic is – I believe – when it works best.  Not when it is slavishly authentic to history and epoch.  There are documentaries and tomes for the purpose of dryly accurate recreation.

The emphasis and subordination at play in the costume Picasso has orchestrated for La Belle Hollandaise, 1905 and the call to public for inclusion in the hellish finale of Don Giovanni in various states of (un)dress (fig. 6).

A key reason as to why La Belle Hollandaise is so hauntingly memorable is that Picasso has figured her not simply as another nude, but a nude bar her unusual Floddermuts.  Her lace cap is an accent, an emphasis; it pulls focus and sets a tone for the entire image.  Our eyes are so attuned to registering complete ensembles that when we’re faced with fragments such as this they appear discordant and persistent.  For the same reason, we may joke at a nude man wearing nothing but socks.  And Helmet Newton might photograph a nude bar for her enormous fur and clutch.

According to the libretto, Don Giovanni’s demise comes when the ghost of the Comendatore arrives at his dinner table, gearing up to drag him into Hell.  Lindy’s conceit for our production entails not a deadly male antagonist but hundreds of female avenging angels.  It is the women in her production who see natural justice served to Giovanni.  And they appear to him as he has experienced them, only this time, crucially, they have the power.  A call was put out by Opera Queensland for hundreds of volunteers to appear on stage in our production nude or semi-nude, perhaps figured as per the La Belle Hollandaise.  Exactly how the women present is largely up to the individual, with very little style-guidance from me.  And the role of these women will be the opposite of passive.  En masse, they consume Don Giovanni.  They are, finally, his Hell and his comeuppance.  Until he, who has been their Hell, is gone. 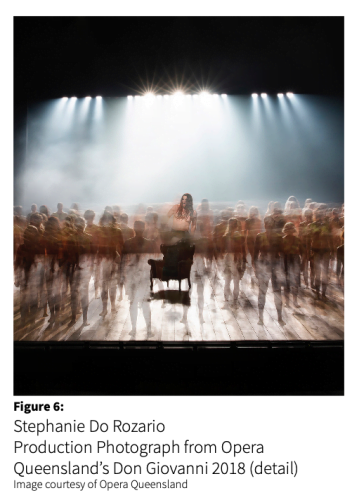