As the costume designer of the mini-series “Lambs of God”, how did you find your way into the world of the series?

Sarah Lambert’s scripts were incredibly rich and evocative and provided endless opportunities for research and visual exploration. After reading the scripts I start searching for images, it is a bit like a funnel where I start broad on topics such as ‘gothic literature’, ‘gothic art’, ‘nuns’ and get narrower as I go. The images themselves usually guide me to more specific searches. Medieval art played a significant role in my visual reference for Lambs of God. The Lady and the Unicorn exhibition was on in Sydney when I started this project and sparked my interest in the long tradition of rich symbolism used in the art. I also cast my net very wide to look at film, television and contemporary art. Eventually a visual story starts to emerge from the collection of images and I can refine the selection to give the reference a clear direction. Visual research never ends on a project, right through the production I still collect images. No matter how many you have there is always another pass required for a specific collar or colour. 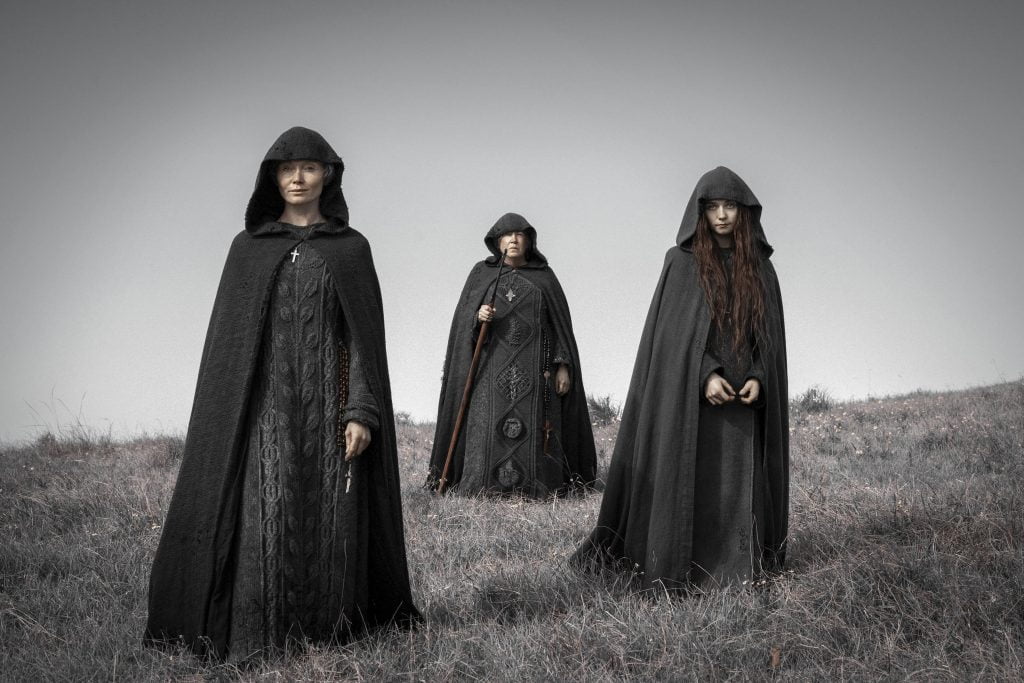 I start with research. Lots and lots and lots of images which I used to guide my conversations with the director and producers. From these initial conversations I refine the images and start drawing costumes. The drawings needn’t be masterpieces, just enough to convey my ideas. The drawings, along with the research material, then become the touchstone for my whole department to work from in creating the costumes. I share all images and have lots of discussions with everyone in the costume department to ensure we are all working as a cohesive unit.  The costume supervisor and I then worked really hard to source yarn for the knitting and find a way to make the incredibly labour intensive process of knitting nuns’ habits fit into the timeframe and budget. I also worked with an incredible knitwear designer and technician in London who helped us through the yarn selection and created the knitting patterns from my costume drawings.

The knitting patterns were distributed to out hand knitters and we started sampling the machine knitting to get the right tension and stitch for the habits. Our buys also sampled lots of commercial knits, of which we didn’t really use in the nun’s habits but which popped up in various other costumes. And knitted blankets, some of which were repurposed into garments. We landed on a system of manufacture that involved both hand knitting and machine knitting and a costume cutter who painstakingly assembled the pieces and sewed them together. It was important to do it this way because we didn’t have access to any of the cast until two weeks before shoot, so whatever we created needed to be be alterable without unpicking knitting and then rekniting.  We also need to much multiples of each habit as lots of things happen to these characters throughout the series and involved stunt doubles and picture doubles.

We created structured linen under dresses which we fitted carefully to the actors, these helped maintain the shape of the knitted habits. We could also launder these dresses which we couldn’t do with the knitted habits. We had to fit each repeat of the nun’s habits separately as they were each a little different due to the idiosyncrasies of each knitted piece and different adjustments were required. Swantje often knitted the adjustments to the habits whilst we fitted their double, this enabled us to see the changes in the same fitting.

The camera tests for the main cast costumes were held about a week from filming and was really the first time we could see how the costumes would look on screen. This was a tricky balancing act because the habits weren’t finished but we had to make decisions about any changes that needed to happen from these tests.

There were, of course, other costumes in Lambs of God that weren’t nun habits. So, we simultaneously worked to flesh out a British seaside town from 1998 and get all the religious clothing right. For our towns folk we had a lot of late nineties reference but it was important that this town felt relatable and not a re-enactment. Colours were important here, as was the fact that is was not in Australia. This was most carefully applied through Frankie’s costumes as she was our touchstone for that world. I also included some hand knitted pieces in Frankie’s wardrobe to draw a connection between her and the nuns holding her brother captive on the island. Many of the extras wore their own clothes or had their own clothes supplemented with our stock. This meant that very detailed and clear briefs were created for extras casting to ensure that everyone who came to set was as prepared as possible. Luckily we were filming winter for winter.

Who made up your team on “Lambs of God” and how did you work with them?

Alison Parker was the costume supervisor and was meticulous with managing the very tight budget, the timing of the diverse makers, and ordering supplies. She also did much of the research of the religious habits and robes, she is an excellent fact checker and ensured that our church dress and rituals were accurate. Alison really was my right hand. We discussed everything in minute detail and as such we always know exactly what the other is thinking, invaluable when running a complicated and fast paced costume department.

Sarah Shepherd was the knitwear consultant and worked with me turning my drawings and reference images into patterns. She advised on all things knitting including which yarns would be appropriate. We spoke every day via Skype at about 5pmto accommodate the Sydney and London time difference, and then often again late at night. We would discuss what a particular image might look like knitted and how to create something that would read on screen. We also discussed the most efficient plan for breaking the habits down into elements to achieve the costumes in time. Sarah is a designer so the discussion was very collaborative and dynamic and she also worked with the feedback from our knitters.

Natalie Bracher doubled as both our buyer and our textile artist / artfinisher. Natalie and I work closely to create the look of the show with her carful fabric sampling, dying and ageing. Not a single item went on screen that hadn’t been touched by either Natalie or her assistant Zana Kohmene. She is a true alchemist and problem solver.

Swantje Lorrimer was our primary knitter (and the knitting hand double for Essie Davis). Swantje is one of the most capable makers I have ever met, she solved knitting problems as we went and helped adjust and create patterns as we progressed. Once the knitting was cut and sewn into habits we found that we had to all work very organically to solve the surprises as they came up. This is where Swantje would always come to the rescue, Swantje is firstly a tailor and this combined with her incredible knitting acumen helped us finish garments that would otherwise have become a headache. Every piece of knitting was touched by Swantje. Our other very accomplished knitters were Lyndell Wright and Lorraine Cherry-Nguyen.

Leonie Grace and her team at Sydney Costume Workshop had the unenviable task of piecing the knitted pieces together and making the habits fit and all of the multiples match. The habits had to stand up to a lot of wear and tear, which would normally distort the shape of knitwear but I worked with Leonie to find invisible solutions to make the habits more durable. In a bigger budget production many of these problems would have been solved by simply making more habits, but we had neither time nor money for that so more lateral solutions needed to be found. Leonie also made our priest robes and choir boy costumes as well as adjusting the many period costumes from the fairytale flashbacks.

Kate Maranovich was our key standby and had a huge job maintaining the continuity as we shot all four episodes simultaneously. She made sure that I was across what was needed for the shoot, the requests and requirements that often emerge on set whilst filming, and kept me abreast of what was required coming up. Although the scripts are set mainly within the confines of the monastery and island we actually had five different locations that made up the geography of the nun’s world so keeping track of each scene as it moved across location and day was really important. Kate worked alongside Lisa Javelin on set and Kat MacFarlane as her assistant standby. 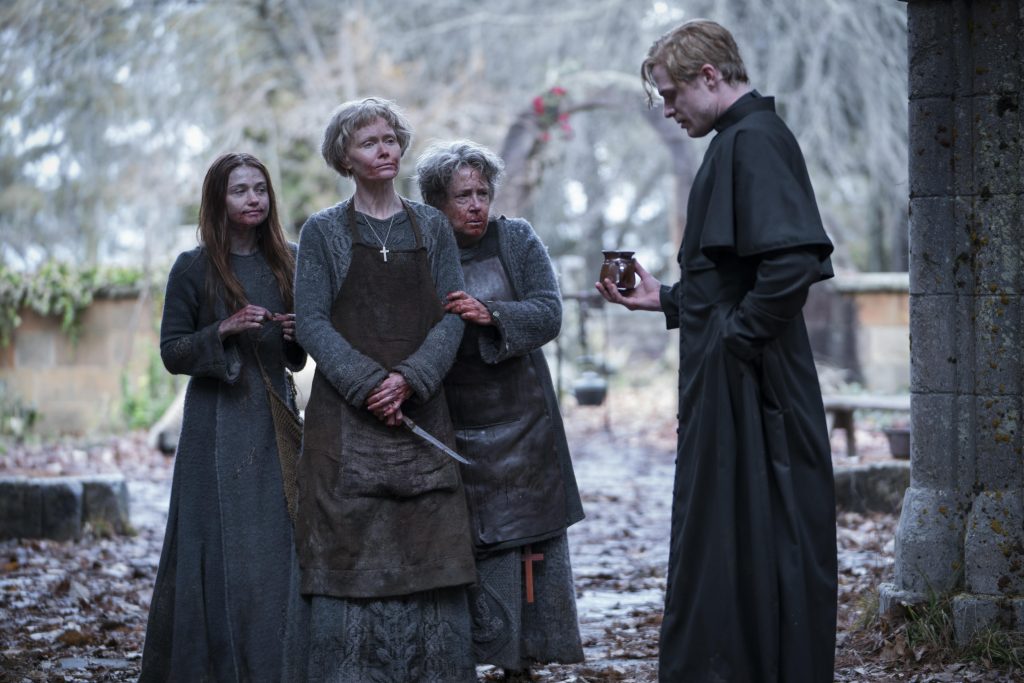 What were the biggest challenges on this project?  Can you elaborate on how you did all of the knitted items in a short time?

Money and time, money and time, money and time. Knitting is time consuming and as such is expensive to commission. So our biggest challenge was to research, design, and produce our costumes in our typically short 6-week pre production. Initially we thought that as we had broken the designs down into individual components we could many knitters to knit multiples and then piece them together. As good as this ‘production line’ of knitters sounded we realise very quickly that it wouldn’t work. Two knitters create vastly different production from the sae pattern and we couldn’t control the tension and size of each piece. So in the end we assigned design to specific knitters. For example, Lyndell knitted the centre from lace of Iphigenia’s dresses and the spider’s web on Carla’s dresses. Lorraine did all the machine knitting which was mostly the plainer panels on each habit. Sadly there were many, many pieces of amazing knitting that ended up getting cut. Swantje spent a 50 hour week knitting individual flowers for Carla’s dress which we carefully stitched on, and then very carefully unpicked.

The reference is everything, my team and I are constantly referring back to them to make sure we are on the same page and constantly finding images to support ideas and give examples. I use Photoshop to draw the manufactured costumes, it is a really important part of my design process because I nut out lots of problems doing this but the drawing also give us all a common image to work from.  I tend to be very hands on and get involved in all aspects of costume production and filming. I find that working alongside people is the best way for us all to be on the same page and the bonus is that I am always learning from the hugely accomplished members of my team, it helps that everyone on my team were very talented and clever.

What does your costume department office look like during the project?

My office looks like a mess. There are reference images on the wall, drawings and samples everywhere. Neither Alison nor I are particularly good at keeping a lid on the mess. My desk has piles of things that make it awkward to work, which is deliberate as the piles are usually things that require decisions and I don’t put them away until the decision is made. We had a particularly tiny office space on Lambs of God, so my desk often became a bit communal. We are also quite noisy and were probably quite a nuisance to the art department next door! Laughter is essential to quality work.